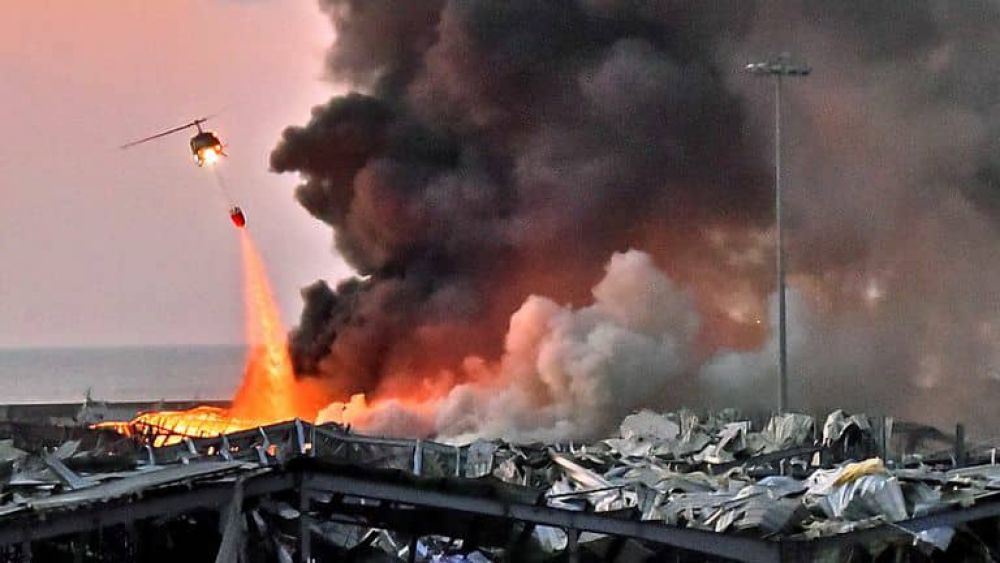 Lubnan Explosion: Failure To Adhere To The SOP; From Chemical Disaster To A Humanitarian Disaster - by Lt Col Dr Maimunah Omar

WHAT IS CHEMICAL DISASTER

Disaster refers to the serious disruption of the functioning of the society causing widespread human, infrastructure or environmental losses, which exceed the ability of the affected society to cope with its own resources. Chemical disaster is one such example. Chemical disasters are the occurrence of emission, fire or explosion involving one or more hazardous chemicals in the course of industrial activity such as in the handling of the storage or transportation or due to natural events. Recently, the whole world was shocked with the massive explosion that had taken place in Lebanon. Despite some early speculations, especially on the social media, the explosion had appeared to be the result of a deliberate attack, possibly a terrorist attack, but later reports confirmed that it was nothing other than government’s negligence in keeping ammonium nitrates in the store house at the Beirut port since 2013. The explosion is considered as Chemical Disaster.

This kind of disasters would normally risk the lives of many people and it could incur high damage losses. Malaysia also experienced a tragedy due to chemical disaster when the Bright Sparklers fireworks factory exploded in 1991. The fire and explosion destroyed the entire factory. In the tragedy, 23 people lost their lives, and additionally 103 others sustained injuries of varying degrees. Among the injured, one was crippled. Several properties, including residential and factory buildings surrounding the factory were damaged as a result of the fire and explosions. There have been numerous explosions around the world due to ammonium nitrate. The worst was in 1947, when more than 500 people died in Texas City during the unloading of a ship carrying 2300 tonnes of ammonium nitrate(AN). The most recent was in West, Texas, in 2013, when 15 people died after an explosion in a fertiliser warehouse. Other accidents are in 1921 - Oppau, Germany, (400 dead, 2000 injuries, 700 homes destroyed, 4,500 tonnes AN), 1947 - Texas City USA, (600 dead, 5000 injuries, 500 homes destroyed, 2,300 tonnes AN), 2001 - Toulouse, France (30 dead, 2000 injuries, 500 homes damaged) and in 2015 - Tianjin, China (163 dead, 798 injuries, 800 tonnes AN)

The majority of the industrial accidents occur due to human errors, as a result of the non-compliance with the standard operating procedure (SOP's) by the company or organisation. Chemical disaster has also occurred due to defects in design, also the absence of the SOPs to mitigate an early warning in the process, not to mention the poor co-ordination between different departments within the organization concerned. Irregular and improper maintenance of equipment in the chemical industry, causes the equipment to malfunction and ultimately fail, resulting in a catastrophic explosion. With regard to the explosion in Lebanon, it is clear that there was a violation in adhering to the SOP. According to  Lebanese Prime Minister Hassan Diab,  several thousand tons of the chemical had improperly been stored for the past six years.  The ammonium nitrate was stored in a normal warehouse when the ammonium nitrate should be stored in a non-combustible building, such as the one made from concrete, with no combustible materials in it or nearby. The General Directorate of State Security's report said many requests had been submitted through memos and letters sent to the country's courts over the previous six years by port, customs and security officials, repeatedly urging judges to order the removal of the ammonium nitrate from its position so close to the city center. It is reported that the port's manifest department sent several written requests to the customs directorate up until 2016 asking them to call on a judge to order the material to be re-exported immediately but it had fallen on deaf ears.

When an explosion from the earthquake shook Beirut on August 4, the Lebanese economy was already in freefall, and to worsen the situation, COVID-19 had overwhelmed hospitals, and the country was already coping with a protracted humanitarian crisis brought on by the war in Syria. This ‘triple crises’ has now merged into a ‘quadruple crises’. As Lebanese authorities announced the end of search-and-rescue efforts on 9 August, the destructive explosions have caused over 200 fatalities and injured over 7,000 people and instantly rendered approximately 300,000 people homeless. Search teams have transitioned to a recovery operation. The blast, which came on top of an unprecedented economic and financial crisis, has pushed Lebanon to the verge of a humanitarian disaster. Lebanon is in the midst of the worst economic crisis in its history, with its banking system under worse strain than during the country’s bloody 1975-1990 civil war. Crippling debts, a currency in free fall, skyrocketing unemployment and entrenched corruption by political elites that have triggered widespread and unenduring social unrest and destruction at the Beirut port could hinder crucial imports of food and medical supplies- something especially perilous for a country that relies on imports for more than 80% of its food needs. In addition to the businesses and livelihoods destroyed, it is estimated that the losses suffered by Lebanon exceeded $15 billion with the Lebanese General Directorate of Security Affairs further estimating that at least 3,972 buildings and 4,214 vehicles were damaged by the explosion.

The worsening economic crisis is now compounded by the coronavirus outbreak and the consequences of the explosions, leaving Lebanese vulnerable and destitute. Before the explosion, hospitals were already near full-capacity, as they were already coping with a spike in COVID-19 cases. Three hospitals in the city were destroyed by the blast. Two more suffered severe damage. Now the situation is deteriorating even more rapidly, with more than 300 new coronavirus cases being confirmed each day. It has become harder for people to protect themselves from the virus while they are living in damaged homes without running water, or while sharing sheltered accommodations with other families. The explosion also destroyed all the wheat silos at Beirut’s port, raising fears that food insecurity will become an even greater issue for people in Lebanon. The Lebanese pound lost 80 percent of its value over the past year. This, coupled with the country’s economic collapse and the COVID-19 pandemic, has made it more and more difficult for families to afford even basic food items such as bread.

LESSON LEARNED FROM THE BEIRUT INCIDENT

Proper Guidelines for Safety. The key lesson that can be taken away from this tough experience is that strict guidelines and a proper governance system addressing safe storage of dangerous chemicals should be developed at all ports by embracing and fostering the storage guidelines of the chemistry section of the International Social Security Association (ISSA).

Compliance with existing rules and regulations. Various rules and regulations of the state and centre should be strictly addressed for a sustainable & safe process. Proper governance systems and safety rules, if they existed there, are not compromised, and must strictly be followed.  A further report on the Lebanon blast emerged, claiming that fireworks were stored in the AN storage facility. That would be a blatant disregard for health and safety rules. AN storage facility should be kept away from highly explosive materials. It is recommended to have a 5-meter area around the AN storage facility clear from trees, shrubs, or any vegetation; vehicles; or equipment, let alone flammable or explosive materials.

Hazard Identifications.  The use of appropriate hazard identification tools such as the checklist analysis, safety audit, HAZOP would help in mitigating hazards. Some reports from the capital city of Beirut alleged that welding activities were conducted near the AN storage facility at the port. If this is true, that would amount to a disturbing safety breach.

Identification of hazardous activities. A knowledgeable and dedicated team of qualified professionals seeking to evaluate the hazards and risks arising from day to day activities is essential. To add, a proper maintenance, regular site safety, and health inspection need to be carried out to ensure that the plant facility is safe.

Emergency preparedness: Designated agencies must have a good emergency response team that can react swiftly to mitigate propagating disasters. It is reported that the security and safety personnel at the port ignored a thick smoke that emanated prior to the explosion. That was the toxic nitrogen dioxide, an evident that evacuation must be immediately conducted. Instead, a firefighting truck had rushed to the source of the smoke, and minutes after, the explosion blasted, and the truck vanished.

International Rule and Regulations It is important to revisit the rules of maritime security, especially the penalties for abandoning vessels and containers, and improper transportation and storage of hazardous materials. If these measures are not taken, and if not done expeditiously, no lessons would have been drawn from the Beirut tragedy. While international maritime security is largely concentrated on piracy or terrorism, the prevention of port accidents does not get the attention it deserves. According to the International Maritime Organisation, since 2017, 97 ships have been abandoned at ports around the world after their owners found them either unprofitable to operate or found that it was difficult to pay fines imposed for transgressions. There is, however, no reliable estimation of the number of containers that may have been abandoned at ports around the world or the number of containers packed with hazardous materials.

Safety should always be given top priority The warnings such as the near miss, incidents, accidents, complaints, recommendations, also constructive criticisms, should be investigated deeply and seriously by the management at all levels and the relevant authorities. Disaster is a rarity in the chemical industry, but negligence or misfortune can very easily result in devastating consequences. The result of a chemical disaster has some dire consequences through generations of the populations which are often almost irreparable and with the impact unimaginable. It has been learned that the negligence of SOP can lead to a chemical disaster and ultimately make the country suffer from a humanitarian disaster, further making the country security exposed and vulnerable.