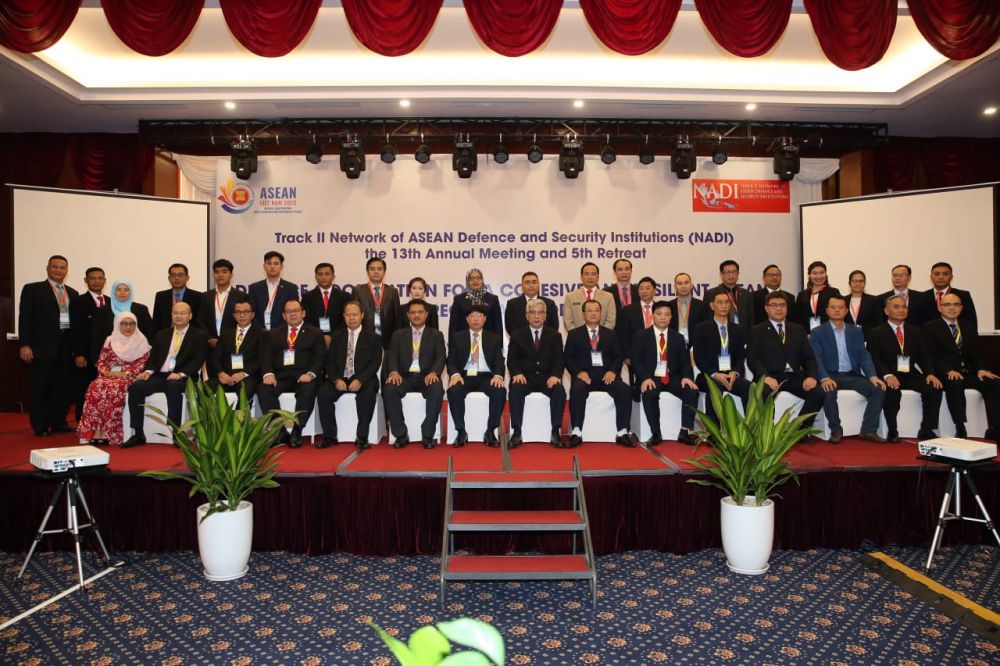 3 Mac 2020 - Delegates of all ASEAN Member States NADI gathered in Da Nang, Vietnam for the 13th NADI Annual Meeting and the 5th NADI Retreat. The annual meeting was kicked off with a Welcoming Remark and Brief on Priorities of ASEAN Defence Cooperation in 2020 by the Deputy Minister of National Defence of Viet Nam, Senior Lieutenant General Nguyen Chi Vinh.

In his remark he highlighted the importance of NADI members to come up with practical and executable policy advise as well as recommendation to be adopted via Track 1 platform in order to enhance ASEAN Centrality.Following the Welcoming Remark was an Opening Remarks delivered by Major General Dang Quang Minh, Chairman of 13th NADI Annual Meeting. The Annual Meeting discussion was divided into 3 session. The first session talked about Strategic Rivalry among Major Powers and Regional Geopolitical Shifts: Opportunities and Challenges for ASEAN Centrality delivered by Dr. Tran Viet Thai from Diplomatic Academy of Viet Nam. Session 2 discussion was on The World and Regional Security Situation and Emerging Security Issues which was presented by Brunei, Cambodia, Indonesia, Myanmar, Philippines, Singapore and also Malaysia, Ms Nor Aini Mohd Nordin. While the third session discussion is on Defence Cooperation for Cohesive, Resilient, ASEAN in response to Regional Geopolitical Change were presented by delegations from Lao, Indonesia, Philippines, Singapore, Thailand and Viet Nam. Among chief topics that was repeatedly emphasised by delegations are big power rivalry, non-traditional security threat Covic-19, maritime security and the need to create a cross sectoral mechanism in term of information sharing.  Discussion also emphasis the need for ASEAN to solve problem internally instead of involving other countries outside of ASEAN. Overall many ideas and recommendation to be presented at ADSOM were generated and formulated throughout the meeting. During the 5th NADI Retreat discussion Malaysia presentation on Enhancing ASEAN Centrality in ADMM-Plus was delivered by Col Sukiman bin Mohamed Ghani. During this session many ideas was generated and recommended among delegates putting emphasis on how best ASEAN should shape our regional agenda among the ASEAN-Plus members.